The demand letter is a letter sent to you by another party by their lawyer informing you that they’re against an action you’ve committed and the reason why. Usually, the goal of this letter is to ask for some relief in money damages. If not fulfilled, you risk suffering legal consequences for not doing as requested within the stated duration.

It’s thus crucial that you always respond to the demand letter promptly to avoid the dispute from getting any worse. But because all this can be pretty terrifying, you might be confused about what needs to be done when drafting the response to your demand letter. If this is the case, here’s an overview of how to write this letter.

What to Include in The Response to Demand Letter

The demand letter is usually the presentation of a claim. Therefore, your goal as you write its response should be to share a counterargument that disproves the claim, and these mainly entails;

Note: Although some of the disagreements come down to “he-said-she-said” disputes, others aren’t as clear. In fact, there might not be any factual disagreement or significant agreement on essential facts. All this will help establish an amicable decision or a chance of making a counter-proposal. With that said, you should always be cautious when taking responsibility, as this might come to haunt you later while in court.

How you Should Respond to the Demand Letter

There are a few things you need to do before you can even start drafting a response to the demand letter, including;

Right after receiving the delivery letter, make sure to go through it to familiarize yourself with its merits carefully. As you do this, you should confirm several other things in the letter such as;

But before you even take responsibility and pay the requested amount, you need to review the appropriate legal standards. It would be best if you did this regardless of whether the demand letter depicts an actual picture.

You need to understand why precisely the party has decided to send the demand letter. It’s best to do this as your complainants might see this either as a quick chance to make money or acting in good faith. Knowing your plaintiff’s intent will help you know the best response strategy to use. If dealing with a good-faith accuser, this may help build a conciliatory tone with them but might not be effective at repulsing an embezzler.

Is Hiring an Attorney Necessary?

It’s no doubt that hiring an attorney is expensive. However, having legal advice is necessary for many complex or high-stakes issues. It’s also beneficial even in simpler cases and ensures you get value for your money.

You must make sure to always respond to the demand letter within the allocated time frame. Doing this is advised irrespective of the claim’s merits as it looks good to the judge if this matter eventually lands in a civil court.

Why Should you Respond to the Demand Letter?

You should never fail to respond to a demand letter as this might lead to the plaintiff filing a case in court against you. This will be time-consuming and costly, and you’re better off avoiding this altogether. But by responding to the demand letter, you open the door for this issue to settled harmoniously and economically.

Doing this will also help avoid ruining both your reputation and that of the plaintiff professionally and personally. Moreover, you’ll need to spend time in court rather than focusing on your company’s operations, thereby negatively impacting its overall productivity.

I’m writing this letter in response to your email sent on February, 28 2021.

In that letter, you had requested I pay you $890 as payment for the refinishing of the floors and walls of 753 Main Street, Apt. 5, Deans Lane, NY, following my departure on January 27, 2021. I had been a tenant at this apartment until this date mentioned above from October 2, 2019.

While I did not pay for the security deposit when signing the lease and are now requesting payment, instead of deducting it from my deposit, I want to refer you to the New York General Laws on rental security deposits. This matter clearly outlines the issue we are dealing with in our case.

While you have included pictures in your original demand letter showing some minor nicks and scrapes around the bedroom, dining room, and living room, there is no evidence showing I am the one responsible for the damage. Even if I caused the damage, this damage does not supersede the “reasonable wear and tear” threshold clearly stated in the General Laws.

Therefore, although I am sympathetic with the struggle of maintaining a rental property, I know for a fact that I am not responsible for the damage in question.

So, I humbly request you drop this claim against me.

It’s no doubt that receiving a demand letter may be worrying. But to make sure the issue is resolved good-naturedly, the first thing you need to do is write a response to the demand letter. If you didn’t know how this needs to be done, highlighted is everything to know about writing the demand letter’s response. 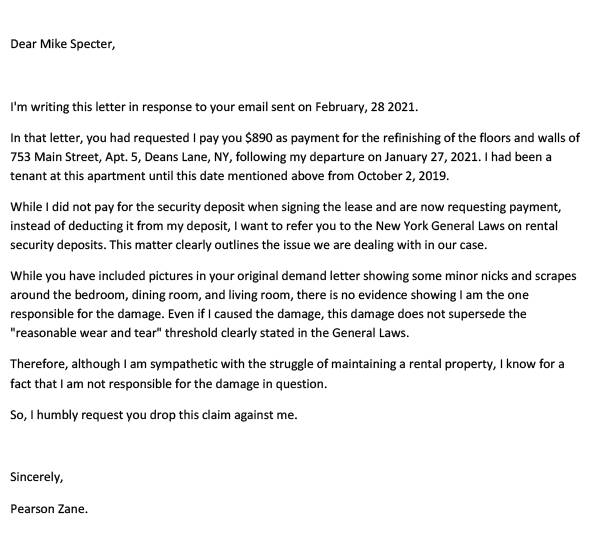 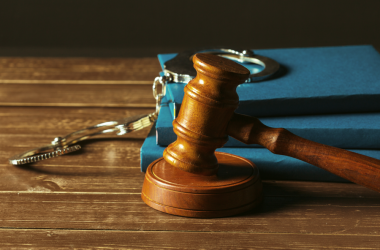 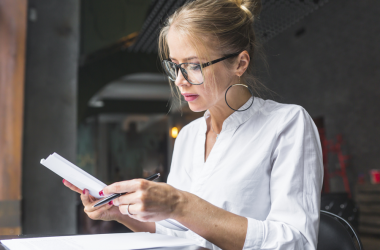 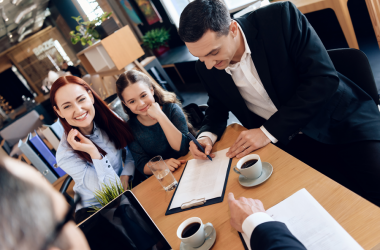